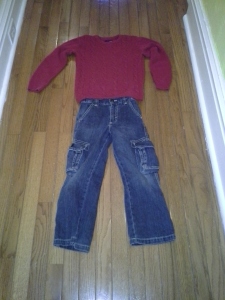 I woke up this morning in terror.  Right before I woke up, I was having a conversation with the woman who had just shot my son.

He was walking down the street, on a beautiful sunshiny spring day, when the white woman across the street shot him, from just inside her front doorway.  As I knelt on the sidewalk and wept over his body – he looked so cute in his red sweater and blue jeans that I barely noticed his blood spilling onto the concrete – she came over to chat with me.

“Because I thought he might be thinking about doing something to somebody.”

Then I woke up.

Once I composed myself, I began interrogating my psyche.  Do I have some deep-seated animosity against white women that I’ve never recognized?  How terror-filled must this woman’s life be that, even from inside of her house, she’s afraid of a seven-year-old, who was probably skipping and whistling as he made his way down the street, because he does that often.  Is our country’s narrative so skewed against black males that most white women feel this way?  How did this woman get to be such a good shot?

Then I noticed the woman didn’t seem terrified at all.  She was talking like she had just performed a public service.  Next I realized that she freely admitted that she had killed my son, yet she wasn’t being arrested or even detained.

I was angry with this woman – not the me in the dream who miraculously remained calm and polite when facing her son’s assassin, no the me whose sheets were soaked with my own tears from sobbing so violently on my bed this morning was terribly angry with this woman.  Eventually my ire against this woman who only existed in my unconscious mind subsided, but then I had to face my very real, every day terror – that my son will never grow to be an adult.

Sadly, this wasn’t the first time I’ve visualized his death.  I’ve pictured him lynched in my front yard, and I’ve envisioned him being brutalized by police.

I realized later in the day that my nightmare was probably fueled by the Jordan Davis verdict and the countless other similar cases in our country’s history, most of which never even made it to trial.  But why a woman? I wondered.  I think my answer comes from the lyrics of “Ella’s Song” written by Bernice Johnson Reagon and performed by Sweet Honey in the Rock.

Reagon wrote this song in tribute to Ella Baker for her countless contributions to the Civil Rights movement.  Long before the 1960s, and until her death, in 1986, Baker fought against oppression.  And in honor of Black History Month, my church’s praise dance ministry just danced to this powerful song.  After hours of rehearsal, the lyrics became firmly planted in my head, apparently both in my conscious and unconscious mind.

After I figured out the possible origins of this dream, I thought I was over it.  But I wasn’t.  I know I shouldn’t worry about The Boy.  I know God protects him.  I know God is in control.  And I don’t just know it; I believe it.  Nevertheless, the woman’s words continued to haunt me.

I thought he might be thinking about doing something to somebody.

While I tried to delve into my own mind, apparently this woman wanted to dive into that of my son.  Like every other human, he is complex, and no one can know everything that goes on in his fertile imagination.  But I do know a few things he sometimes ponders.

If he’ll get to see Moses, Abraham, Samson, and “all those guys” in heaven.
If Samson got his eyes back once he went to heaven.
How resurrection bodies are different from earthly bodies.
How to antagonize his sister.
If he’ll one day be MVP of the Superbowl.
How to design a city.
If his sneakers are fashion-forward.
Where to go to college.
Which friend to invite over for a play date.
How to make better stop-animation videos of his Lego guys.
What’s for dinner.

What I’m pretty certain he’s not thinking about is his untimely demise.  He sees nothing but a bright future ahead for himself.  And that’s all I want to see too.

Composed Primarily of Coffee and Exasperation

Oh! Take a shit, read a story. - My Mother on flash fiction

My Adventure in the Philippines as a Young Adult Volunteer

"He brought me to his banquet hall and raised the banner of love over me. Restore my strength with raisins and refresh me with apples! I am weak from passion... His left hand is under my head and his right hand caresses me" - Song of Solomon 2:4-6

all for the glory of Christ

Everything but laundry and groceries.

Words are beautiful beyond meanings

Daily Thoughts and Meditations as we journey together with our Lord.

A dash of writing with a twist

"The daughter of a lion is also a lion"

This Is What We Speak

Librarian by trade, geek by choice, artist by nature.